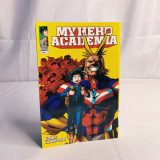 Volume 25 covers chapters 236 – 246 in the manga and episode 111-112 in the anime
.
Synopsis:
Meta Liberation Army Arc
All For One’s personal confidants have given Tomura Shigaraki a near-impossible challenge that, if he can beat it, will prove he is worthy of being his master’s successor. Meanwhile, the Meta Liberation Army, a group that opposes Quirk restriction laws, has kidnapped Giran in an effort to lure the League of Villains into a trap, not wanting them to become more infamous than Destro, the leader of the original Meta Liberation Army.
Since the terrifying incident when Tomura’s Quirk manifested, only the greatest villain of them all, All For One, has been able to speak to the broken young boy’s heart. The consequences of that fateful meeting play out in the present as Tomura and Re-Destro, the leader of the Meta Liberation Army, battle for supremacy—and if it takes leveling a whole city to sort out who’s on top, so be it!
.
Number of pages:  192
Release date: October 2020
Age rating:  13+
Number of volumes: 30 (ongoing)

Be the first to review “My Hero Academia, Vol. 25 by Kohei Horikoshi” Cancel reply